My Christmas Vacation at Sam and Pippen's House - A Guest Post!

Hello, everybuddy!  My name is Mitzi and I was abandoned by my mom at Christmas!  She is supposedly coming back to get me as she just went on a mini-vacation... I'll believe that when she gets back!

Anyway, I've been at Sam and Pippen's house for four days now and let me tell you... those boys are crazy!  Don't worry about me though... I'm a girl and I know how to boss them around! 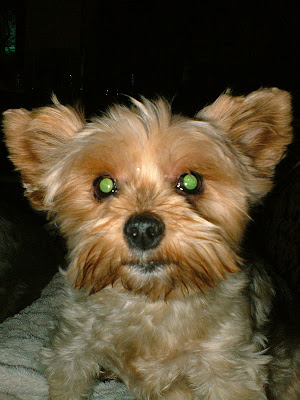 At first their mom would take us all out at once but it was just crazy making for her - nothing that I did of course... It was all Sam and Pippen's fault.

As a matter of fact, she tried to sell one of us to a neighbour and they said there was no way they'd buy Sam but they would certainly take me!  That's because I'm so cute!

Anyway, whenever we were outside together, Sam had to follow me around and get in my business!  As soon as I used the facilities, he was there to pee right over mine!  He even told me why he did that... he didn't want anyone knowing a GIRL was staying at his house!

I thought that was pretty nerve-y of him so... 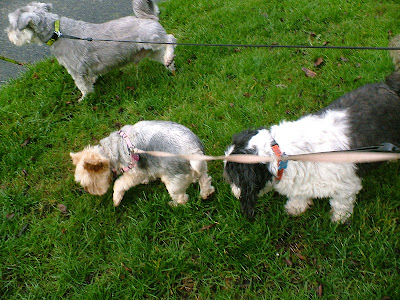 on Christmas morning, when he opened his present from Santa, I stole it from him! 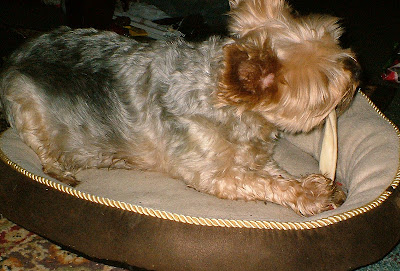 I sniffed out his hiding spot for one of his yummy bones.... 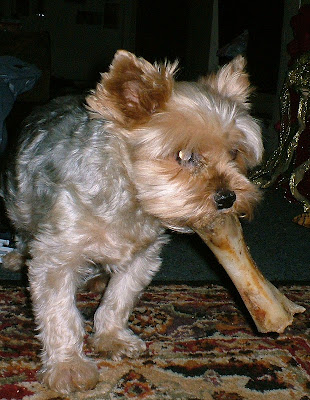 and I nommed on it!  I even turned my back on both of them when they started to whine and cry! 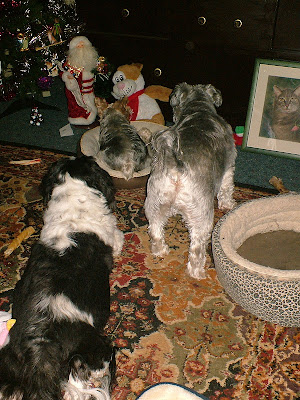 I took over Sam's nice and comfy bed AND made sure that I kept MY bone with me! 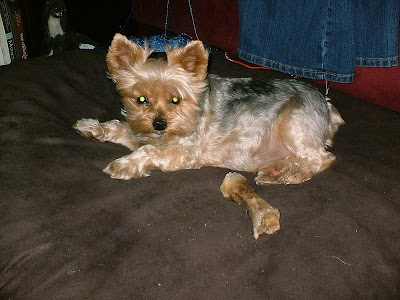 To top it all off, I used all my 'cute little doggie' tricks on their mom so that I would get the majority of the snuggles, cuddles and belly rubs! All in all this is a pretty great place to stay!  It's loads of fun messing with the boys because they are total gentlemen and would never be mean to me in any way! 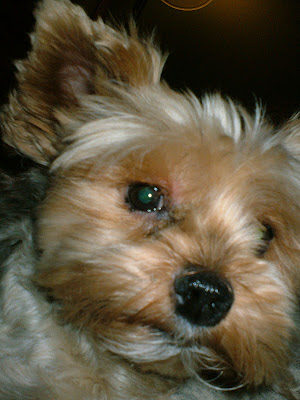 Actually,  I should tell you that I luvs these guys... they are my heroes!

I don't know if they've ever told you all this story but this is why I luvs them...

My mom adopted me when I was 3 years old.  Up until then, I spent my whole life in a bathroom and didn't get to go anywheres.  When I went to live with my mom she would take me to the dog park everyday but I was so scared that I'd hide in her jacket!  Every time I was there these two guys would be there too,  They wanted to be friends but I was having NONE of it until a couple weeks later... by that time I was getting brave enough to sit beside my mom on the bench.

There I was on the bench and the boys were sniffing nearby when one of their big dog friends, Wendell arrived.  This was the first time that I would meet Wendell and he was a BIG hound dog!  Wendell came bouncing over and tried to sniff me and I was so scared that I cried out... you would never guess what happened next!  Both Sam and Pippen ran over and got between me and Wendell and yelled some HBO words at him!  He was so scared that he ran off!

After that if I saw my boys at the park I knew I'd be safe so I wasn't scared anymore!  Eventually, I even started telling off the big dogs on my own if they sniffed me wrong!  I even scared three labs one day that tried to gang up on me... I'm sure they'll think twice next time they meet a Yorkshire Terrier!

So even if everybuddy else thinks they are cracker dog crazy... I know the truths about them! 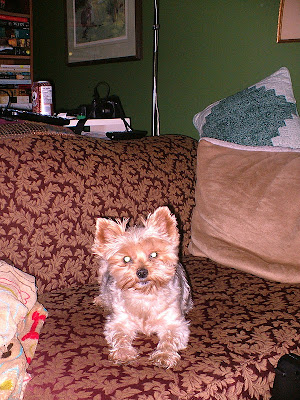 They tell me that my mom will be picking me up today to take me home again... I had an awesome vacation and would give Sam and Pippen's four paws up for great vacation destination even if they did smack me on the head a couple times!