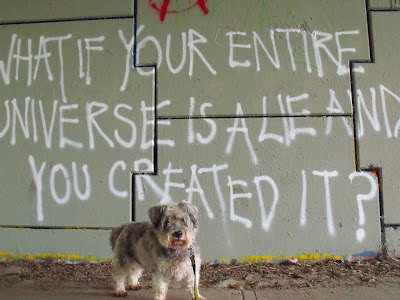 On Sunday morning mom said, "Let's go!"  so I said, "You betcha!" even though I had no idea where we were headed.  After quite a long car ride, we finally parked the car and got out.

Mom told me that the salmon were spawning and we should check it out.

Okay... Let's head down this trail! 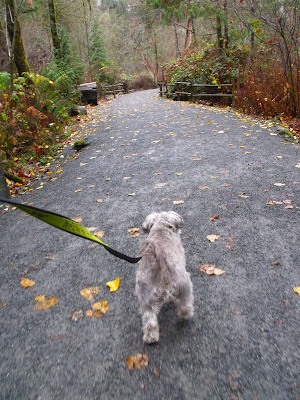 We had to stop at this tree that fell down so that mom could take a picture of me in front of it.  Can you believe that she even said, 'maybe you should get in it, wouldn't that be a fun photo?' 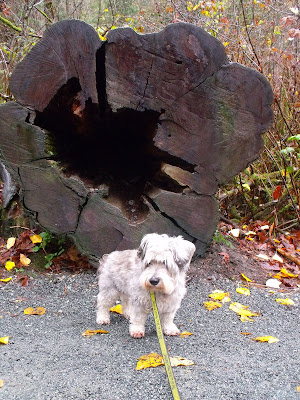 I've never been to this park before and mom says it's been years and years since she's been to it.  The morning was overcast and foggy but that just made the sceneries more spectacular! 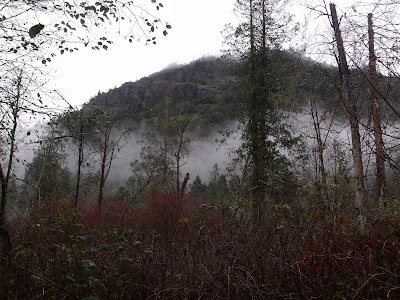 A nice little stream that had a bridge that we walked over... 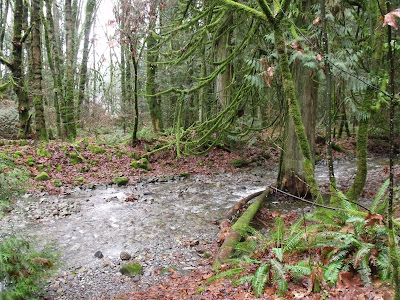 Mom tells me that sometimes you can go through this tunnel to get to the other side of the highway and see more of the park.  We didn't do that because there was lots of water going through there and knowing mom as I do, she would have tripped and fallen and gotten us both soaking wet! 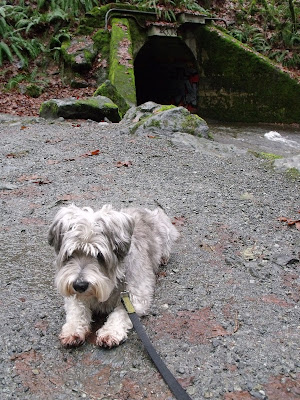 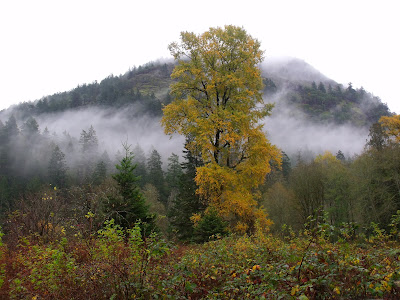 And we saw TWO eagles!  I'm sure they were just waiting to eat some of the dead salmons! 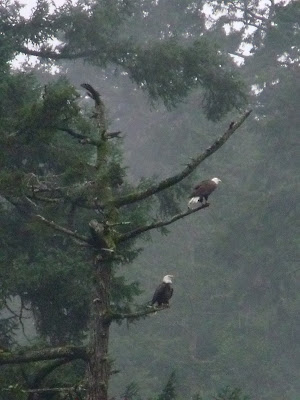 Here I am, taking a break and keeping an eye on the eagles... I don't think I really want to be some birdie's lunch! 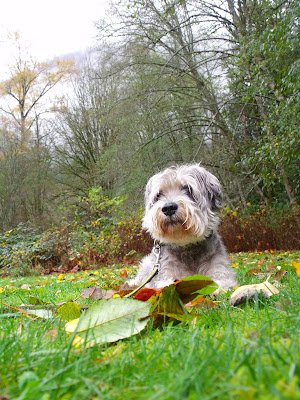 Hurry it up, mom!  Let's go find those spawning salmon! 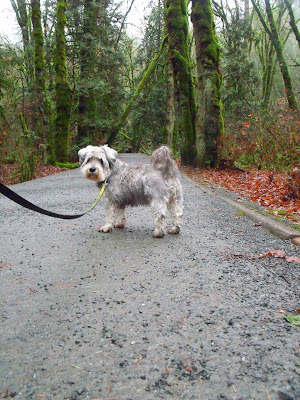 Here they are!  After they finish spawning, they die... and then the seagulls, eagles, ducks and other wildlife eat them up!  But lots of them weren't eaten yet and they were just laying around... getting real nice and stinky! 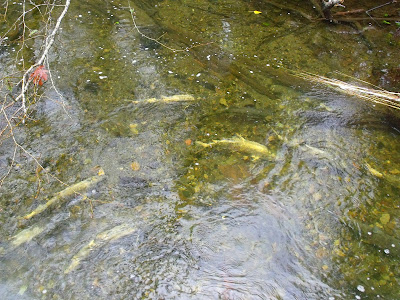 Mom told me that I wasn't allowed to get close to the stinky fish!  I told her I wasn't gonna do nuthin but roll on it... but she still made me stay clear of it... most unreasonable, mom! 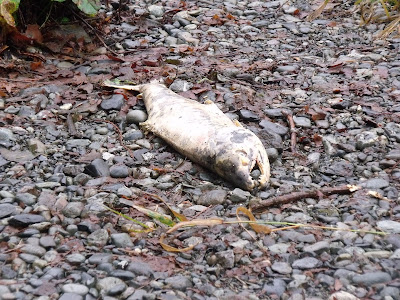 Even this seagull was watching me!  He totally didn't want me to get near his lunch! 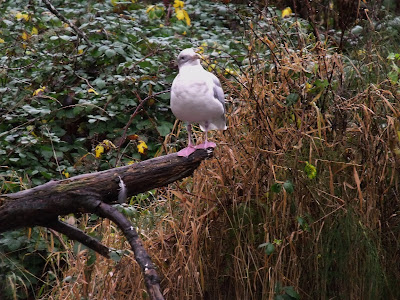 So there you have it!  My Goldstream Park salmon spawning adventure! 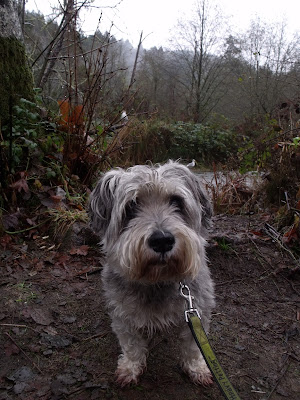 I hope you had as much fun as I did!

Did you know that on Sunday we got an extra hour of daylight?  When mom told me that I was all like, WHAT?  After I got over my amazements, I told mom to chip chop and take me on a walkie!

Of course, mom got up right quick and got my leash and we were off!

We hemmed and hawed about where we should go, if we should get in the car or just walkie around the hood.

We decided to just walkie the hood and set off for our favourite trail along the Colquitz River. 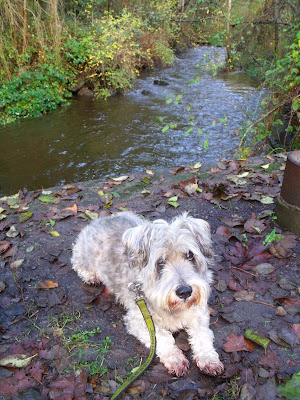 It's been raining quite a bit lately so the river has lots of water in it.

That's a good thing because the salmon are coming back to spawn.

You can see how fast the water is going over the rocks!  We kept looking for a fishy but didn't see any. 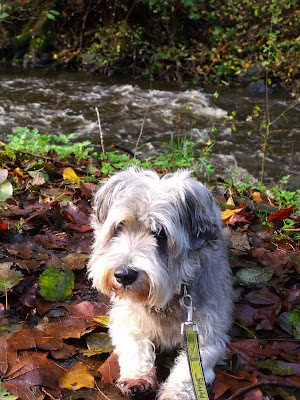 There's lots of different kinds of mushrooms out so mom's always looking for some to take their picture... 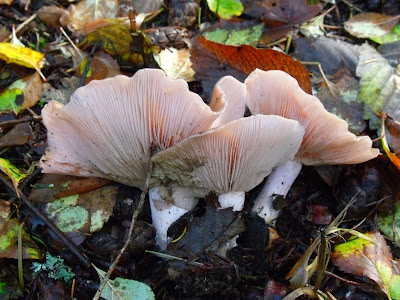 Most of the leaves are off the trees and on the ground now.  Both mom and I like autumn days, it's nice and cool and much nicer to walk forever than in the hot summertime! 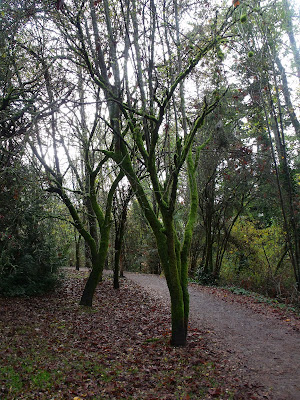 We might not have seen fishies yet but there was a duck! 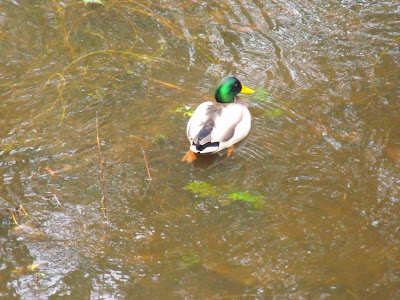 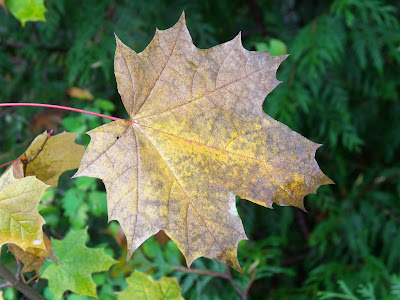 We got to the end of the part of the trail we walk and we about to turn back when we saw some other peoples taking another trail.  Mom and I conferred and decided that we should check out this trail too!  We went over a bridge and when mom looked over the side, do you know what she saw?  A salmon!  He was too quick for her to take a photo though but he was real big! 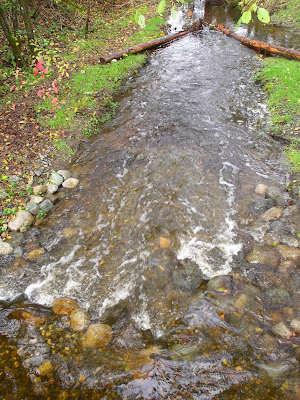 Then mom looked down the river and there was this guy! 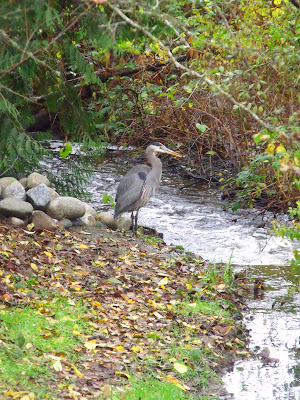 Just patiently waiting for his dinner to swim by... 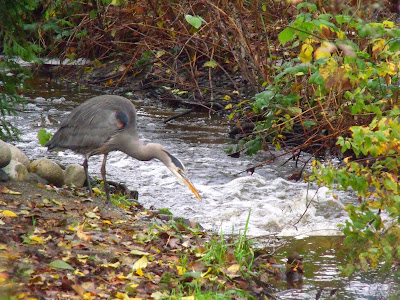 Mom and I were gone on walkies for over an hour!  I think we used up that free time we got pretty good... hopefully we get another free hour next weekend!

Last weekend we woke up to a clear sky so mom bundled me into the car and we took off to watch the sunrise at the ocean. 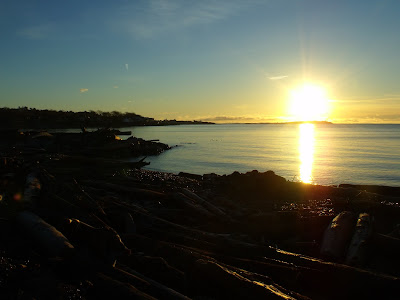 During our walkie I found this real nice piece of driftwood to take home but mom said 'no way'!  I think she was being very unreasonable! 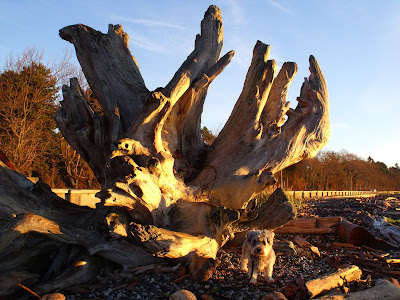 People on our walkie told us that if you looked closely you could see some Humpback Whales shooting water out of their blowholes!  Mom said she could see it but was too far away for our camera to catch it. 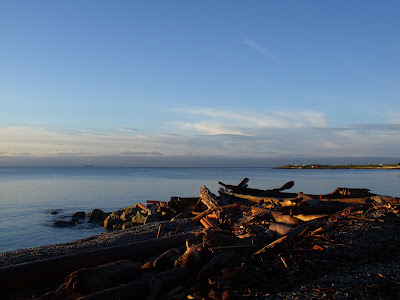 A nice birdie taking in the sunrise... 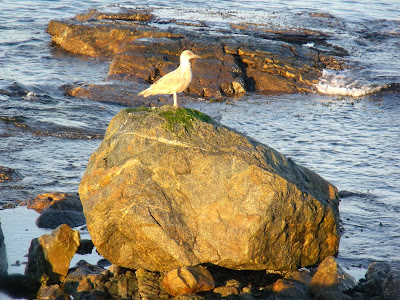 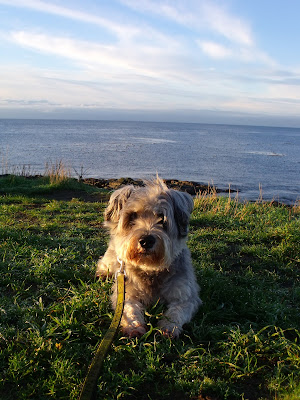 We might not have seen any whales but we did see this Eagle flying around! 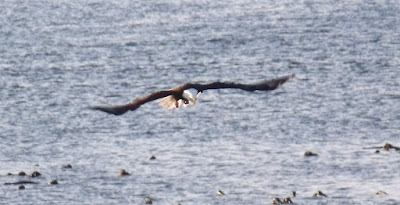 I'm hoping this weekend is just as much fun and sunny! 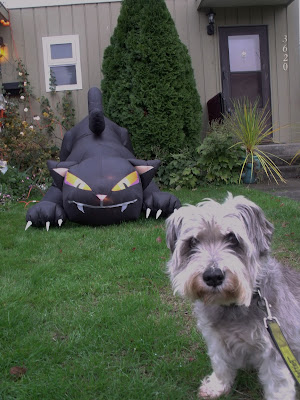