Mom went back to work yesterday after spending 9 days with us!  We don't like the fact that she goes to work and leaves us at home but someone has to bring home the beggin' strips!

Anyway... Pippen moped around for most of the day and so did I to be truthful. 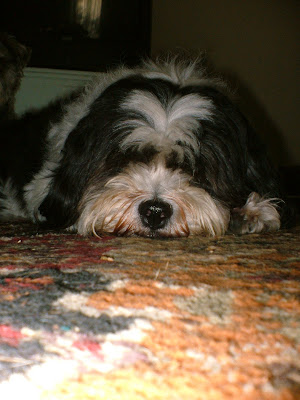 But then I saw the most wonderous thing outside in our backyard!
A Squirrel! 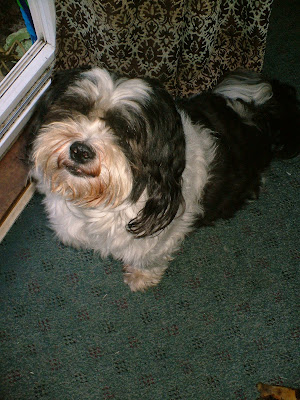 With Pippen's help I managed to open the patio door and got out there and killed it!
Here I am with his leg bone... 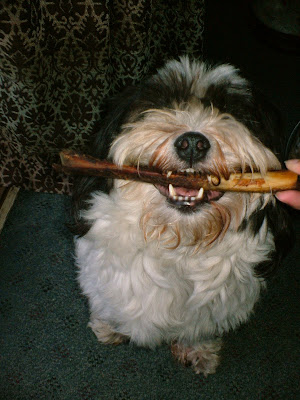 Boy was he yummy! 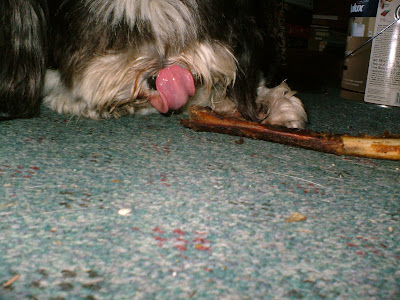 Of course, I 'accidently' locked Pippen outside so I wouldn't have to share the squirrel leg with him. 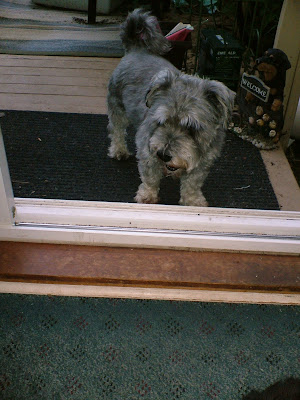 Well... mom and I have already had a fight this morning... I spent the whole night coneless and now she thinks I should have it on again just cuz she's going out! 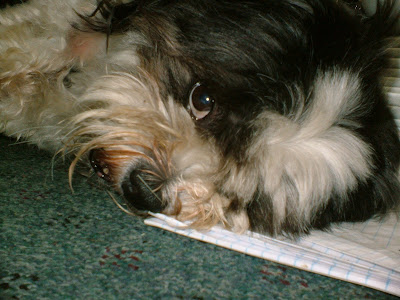 She says my paw looks like it's a bit red because someone may have been licking it... 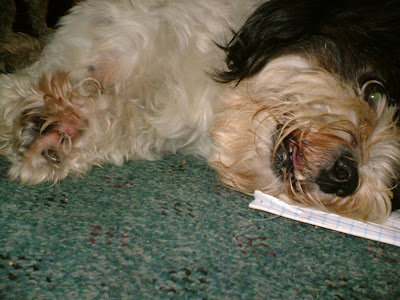 I don't think so... I'm just trying to get the stitches out! 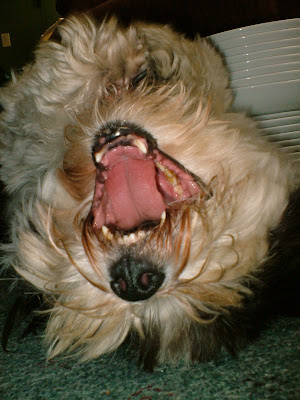 That cone isn't going on this head again, lady!!! 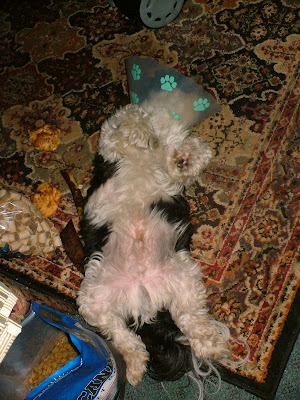 Guess I lost that one...
Maybe I'll fare better tomorrow.
Posted by Pippen at 8:47 AM 8 comments:

As if it isn't bad enough to have to wear a cone... 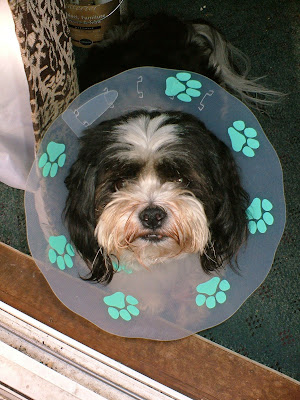 and listen while they call me 'Conehead'... 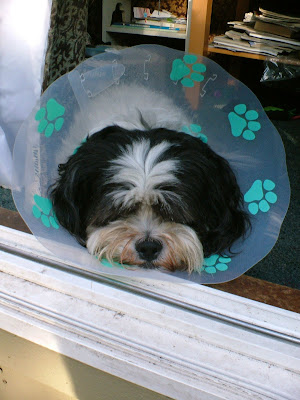 Now they're making me look silly! 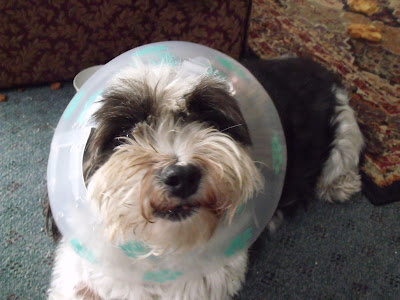 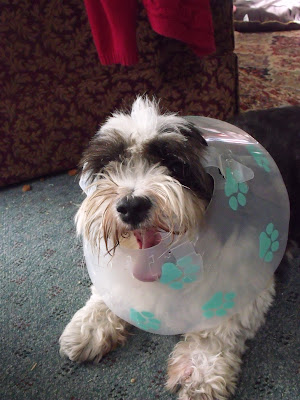 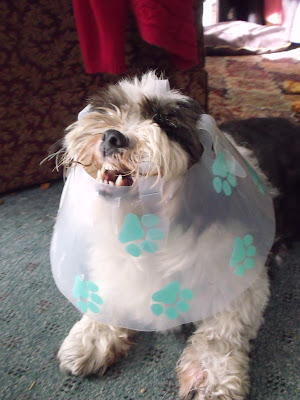 I know where you guys live!
Posted by Pippen at 8:34 AM 8 comments:

I thought Sam's head was big BEFORE he went all conehead on me but now... 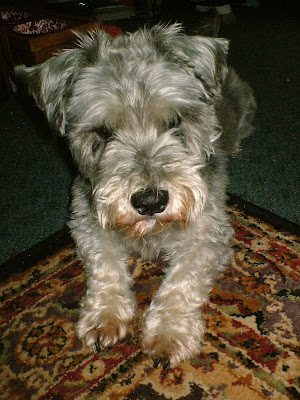 He can't even fit it on the sofa! 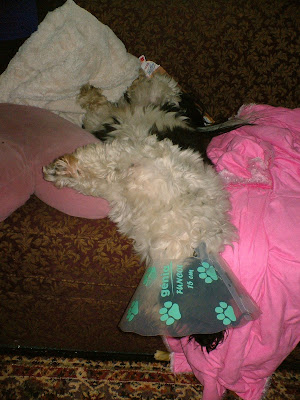 How is this comfortable? 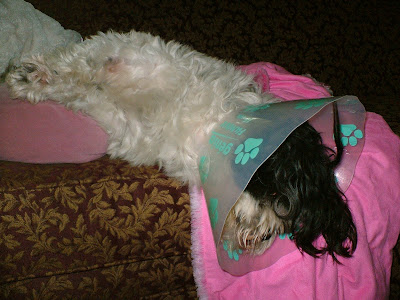 Mom has stopped his pain meds... she thinks it may have affected his brain. 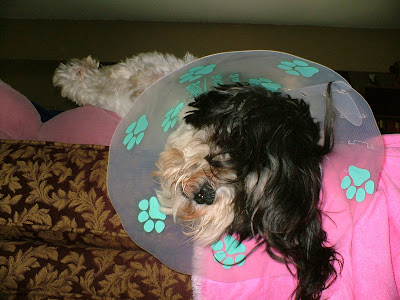 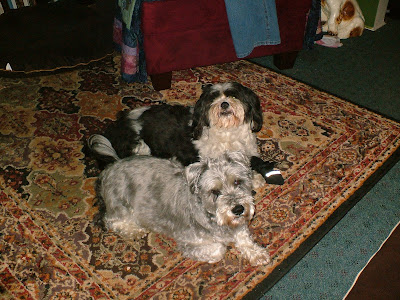 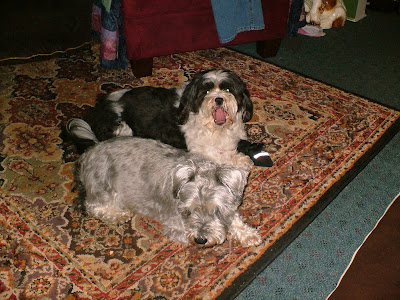 Yesterday was THE day that the vet said I could take off the bandages...
Chico Kitteh kindly inspected my paw before removal and said that in his professional opinion 'my feet stink'. 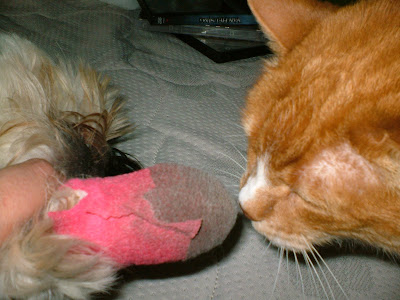 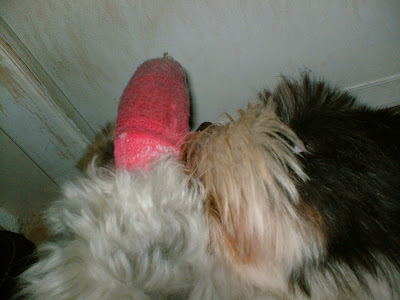 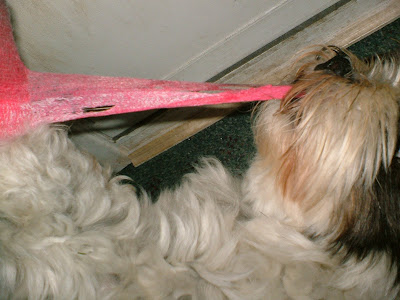 It took me most of the night but by morning, I had it all off!
Let me tell you... mom wasn't too happy cuz she caught me licking it... 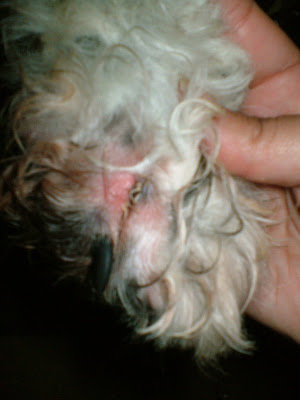 So she tried putting the bootie on me but when she wasn't looking...
I'd yank it off! 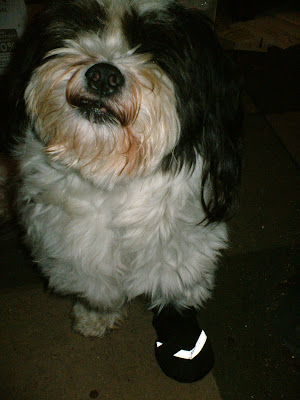 So you know what that means, don't you??? 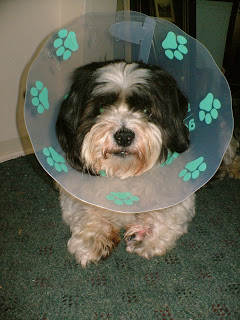 Instead of eating and sleeping all the time, I've decided that I need a hobby...  Something that will occupy my mind and paws...

Mom does a lot of crocheting so I thought I'd give it a try. 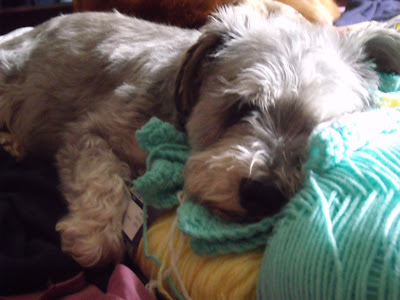 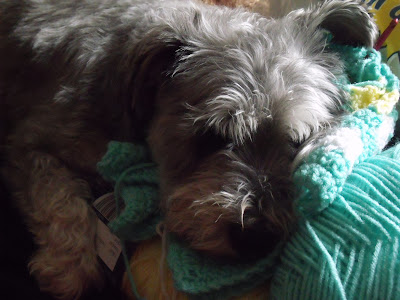 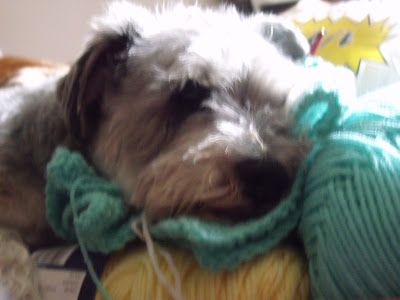 Let's talk about me!  After all today is my Gotcha Day Anniversary!
Yep!  Six years ago, Sam, Mom and my auntie drove all the way up to Youbou (might have taken an hour...)
Mom didn't tell Sam why they were going for the drive, just in case she didn't like any of the puppies, so when they got there Sam was pretty excited!  My dog mom and dog dad were there and I had two brothers and three sisters.  I can remember that all us young'uns were in a big box, I was the first one to see Sam and Mom and made sure that I was the first one that they saw too!
I think it's fair to say that I was the cutest one in the litter!
Don't tell Sam but I've always looked up to him...  He's taught me a bunch of good stuffs.

On our walks he's always in the lead and I always look to him on where we should go next.
Let me tell you, that one morning that Sam was in the hospital when mom and I had to go by for a walk by ourselves was kinda sad...  I didn't know what I should be sniffing or where I should leave the pee mails.
Both mom and I walked real slow that morning...
I really did miss my brother and when we when to pick him up and I found out we had to wait, I cried and cried... all the peoples there thought I was really cute but all I wanted was to see my Sam again!
But we are all together again today to celebrate my 6 year Gotcha Day Anniversary - mom bought us snausages!
Mom says that I should also mention that Sam is doing great!  He takes all his medicines like a big boy with no complaints.  Mom bought him booties today to protect the bandage from getting wet on our walks and he doesn't even complain about that!  Tomorrow we take off the bandage to see how it's healing.
Sam wants me to tell everybuddy thank you for all the well wishes!  His paw didn't hurt as much when he read them.
Posted by Pippen at 2:52 PM 11 comments:

So I got some real good news today...
I don't gots to go to my groomer on Saturday!
The bad news is that mom and Pippen had to take me to the Emergency last night!
I had been licking my paw a lot so mom took a look at it and guess what... it was totally all swollen up!
Mom suspected spear grass also known as foxtail... so off we went to the hospital.
One of the nice ladies took me into the back room and then the doctor went and talked to mom and Pippen.
The doctor said that I let them look at it but when they wanted to touch it I got mad.  So the doctor said that they would have to sedate me and open up my paw to see if any bad things were inside.
And then the went home!  Just left me there!  Can you imagine it?
Mom called the hospital early this morning and they said if she brought lots of bags of cash, they would release me.  Pippen tells me that she really hemmed and hawwed over that but eventually decided to spring me from jail.  Good thing, I'm thinking!
The doctor said that they did a big incision and went real deep but couldn't find any foreign material (really why the heck was he looking for material when mom told him it was spear grass???)  He said that they flushed the wound and stitched me back up so I should be good to go once I'm all healed up.
So for the next few days, I'm gonna take my pain meds and antibiotics...
and catch a sunbeam and have some really good dreams.
Oh and you know what?  Now that the crisis is over... Mom's calling me "Gimpy"
Posted by Pippen at 9:06 PM 18 comments:

Email ThisBlogThis!Share to TwitterShare to FacebookShare to Pinterest
Labels: Sam

I've been thinking...
Now that I'm 7 and a half, I should get my driver's license.  I think this would be so helpful to mom that she wouldn't be able to say no!  I mean... Pippen and I could go to the park ourselves.  We could do the grocery shopping at PetSmart (we aren't allowed in the human grocery stores).  Just think of all the trouble... er, help we could be!
This weekend, Pippen and I went vehicle shopping to see what would be best for us...
Check out this awesome dump truck!  Way cool!
Ultimately, I walked away from it.  Once I factored in the cost of gas it didn't seem to be the right vehicle.
Then I checked out this red convertible!  Just think how hawt I'd be and the girls would be totally checking me out and wanting to go for a ride in it!
But then I saw the motorcycle... and it came with it's own helmet!
How awesome is this?  And how totally bad would I look riding around town on it?
Tell me.. who wouldn't want to be seen riding around town on this?
Now that I've decided on the right vehicle, I have to talk mom into co-signing the bank loan.
I'm pretty sure she'll be eager to let me get my own wheels.
Posted by Pippen at 12:26 AM 11 comments:

Mom said she wanted to do something different for our early morning walkies, so today we got into our car and drove downtown and walked around our Inner Harbour!

Some of you may not know that we live on Vancouver Island in British Columbia, Canada.  We think it's a most awesome place to live!

We parked the car and the first thing we saw was this guy just sitting on this bench... and he didn't move at all!  We even sniffed his leg and stuff but he must not like dogs or something.

Then we went down this hill into a parking lot.  We wanted to go FAST but mom kept telling us, 'go slower'...
Then we were on the causeway and look at that... there's a killer whale!
and that building in the background is The Empress Hotel... mom says its kinda famous.
We just had to check out the water... we didn't see any fishies or nothing.
There's the Parliament Buildings... Victoria is the capital of BC so we have all the government stuffs here.
I always have to be a rebel...
and a nice photo of the harbour with all the boats and stuff.
Mom, I think I see a whale in the water...
Can you read what's written there?  It says 'Welcome to Victoria'
When we got there Pippen peed on the 'm'... he said he would have peed on the 'p' if one had been there!
Gotta check out the waters again...
The first weekend in August they have something that they call 'Symphony Splash'.  The Victoria Symphony gets on to a barge and they play lots of music and everybuddy in Victoria goes to listen... except for mom, of course.
Here's a totem pole... it looks kinda scary, doesn't it?
Then we crossed the street because mom wanted to see a new statue.  When we got closer I saw this dog!  He was just standing there so I woofed at him but he totally ignored me!  How rude!
Mom got her picture of the statue of Emily Carr - she was a famous painter that lived in Victoria years ago.
Then we checked out some steps on the hotel grounds.
and by that time, mom was tired of taking pictures and we were just plain tired!
So after taking a breather, we headed back to the car and home!
Hope you like our little tour of Victoria's Inner Harbour.
Posted by Pippen at 8:34 AM 9 comments: