We cruised on over to our friend MJ's blog and found out that she won't be posting any pictures of herself because her dad 'took' the camera with him...  Knowing MJ like we do, we are inclined to believe that she packed that camera for her dad herself!

Well, we just want all her friends to know that we still have our camera and will be taking photos of Miz Mary Jane whenever we see her at the park.  As an added bonus, we'll only post the embarrassing ones!  Like this one: 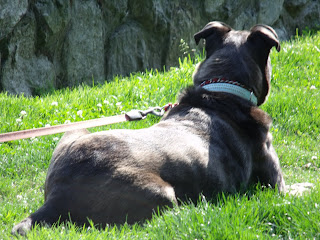 Good thing our new camera has a wide angle lens... not saying we used it for this photo, we're just sayin' good thing it has one...
Here's another one with MJ wearing that hard hat: 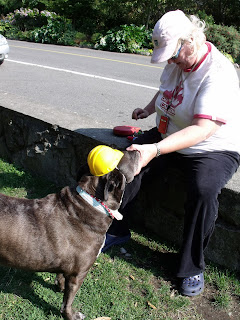 We've also heard a rumor that MJ has a love affair with a stud on the internet.  We're wondering if he knows what's happening when MJ is out in the real world? 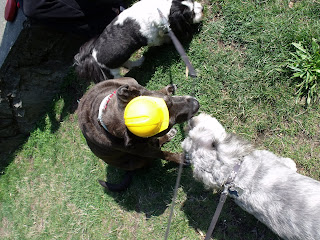 That stud of MJ's can't be too studly cuz it looks like that's MJ and Pippen kissing...

We probably won't be posting too many more pictures of MJ cuz when she sees these she's going to kick our bums clear across Canada!
Posted by Pippen at 6:03 PM